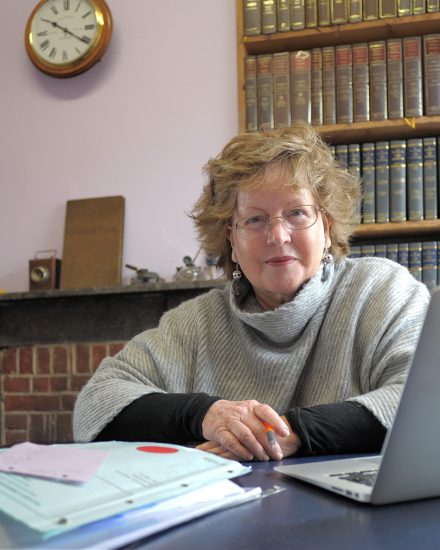 Hard to believe now but female solicitors were once very much in a minority. As one of this early breed, Jo took the articled clerk route into the profession, being admitted in 1973 and now, having retired,  acts as a consultant to the firm.

Despite extensive travels, she eventually wound up in Suffolk, undertaking many stints of locum work around the county.  It was in this way she started to become a fixture at Cross Ram & Co and also  took the opportunity to take a First Class honours degree through the Open University, .

Although her travels occasionally lured her away from the office,  she went on to specialise in commercial property work. After 25 years with the firm, latterly as Jonathan Margarson’s business partner, Jo  ‘retired’, although her background knowledge of long-standing clients has proved invaluable in her continuing role as consultant to the practice. In this limited role, Jo is available to the public only on an occasional basis.

Jo has fond memories of their very first home in Halesworth, a Victorian townhouse in London Road which she and husband Nick Fisher ‘did up’ before moving to do the same at the other end of town and more recently moving to their self-build at Westhall, the award-winning Belle Grove about which she has written.